What Do The Tire Speed Ratings Mean?

The speed rating of a tire is based on U.S. Government standards for reaching and sustaining a specified speed. Typically, a tire with a higher speed rating results in better handling. Speed ratings are determined via laboratory tests that simulate road performance at various speeds.

Below is a list of speed ratings along with the corresponding speeds they represent. Remember that the speeds listed are test speeds and not recommended speeds. Speed ratings apply only to the tire itself, and not to a particular vehicle. Putting a tire rated for a certain speed on a vehicle does not mean that the vehicle can be safely operated at the tire's rated speed. 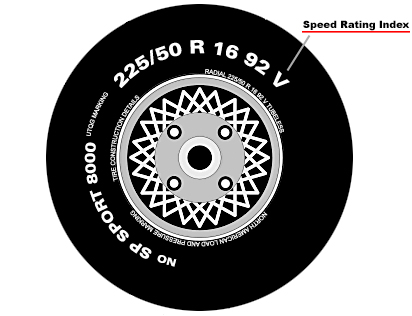 Speed ratings are based on laboratory tests where the tire is pressed against a large diameter metal drum to reflect its appropriate load, and run at ever increasing speeds (in 6.2 mph steps in 10 minute increments) until the tire's required speed has been met.

If a listed speed rating contains two letters (such as VR), the first letter represents the speed rating and the second letter (R) indicates that it is a radial tire.